In this guide, I will show you how to unblock a number on iPhone using settings & app. With the hustle and bustle of our daily life, we are always disturbed by annoying calls from a number that are not familiar. It could be a marketing offer or someone random.

Blocking numbers you don’t want calls or messages from is really a useful feature but it is very possible that you want to reverse the action by unblocking such numbers.

Unblocking a number on iPhone is straightforward and not difficult, so perhaps you have a change of mind or you have decided to hear whatever the person you blocked has to say or you mistakenly blocked a person, we have prepared this guide to put you through the process of unblocking a number from getting through to you on your iPhone through calls, text messages or FaceTime.

Read Also: 2 Methods to delete All Emails on iPhone

How to Unblock a Number on iPhone from Settings

When you realize that some numbers were added to the blacklist on your iPhone by you, you might think of removing such numbers from your blacklist.

Unblocking numbers from your iPhone mean the numbers will be unblocked too for calls, text messages and FaceTime at the same time. Ensure it is all these features you want to unblock the numbers for.

STEP 1: Get access to the Block feature on your iPhone

From the home screen of your iPhone, launch the Settings app. Scroll down and select Phone > Call Blocking & Identification. A new page will pop out. Navigate down the screen to select the blocked numbers.

Tap the Edit button and make a selection of the number you wish to unblock. Tap the minus (-) button beside the numbers. Then hit Unblock. You can also swipe the numbers from left to right and hit Unblock.

Finish up by tapping the Done button located at the top-right corner of the page. 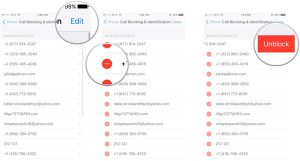 If you follow the steps, you will successfully unblock the numbers you blocked previously. You will also be able to receive calls and messages from the unblocked numbers now.

How to Unblock a Number on iPhone from Calls and Messages

If you need a solution to unblock numbers you previously blocked, this is another method you can follow. With the unblocking feature in the phone and message app, you can unblock numbers with ease. Check out the following instruction to get started.

Open the Phone app and look for the number or the name of the contact you blocked in the Recent tab. After doing that, select the blue icon to the right of their name, navigate down and tap Unblock This Caller.

You can do something similar with the Message app. To unblock a contact from Messages, select the message thread with the contacts. Next, tap the small blue “i” situated in the upper right. Select the information icon and navigate down and tap Unblock This Caller.

You can do this same process to unblock numbers on iPhone for FaceTime, iMessage and more. 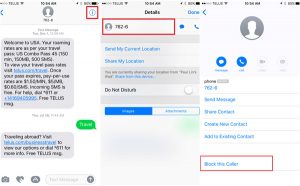 How to Unblock a Number on iPhone through Third-Party Apps

If you block and unblock numbers on a regular basis, you might consider downloading an app that can help you manage all these. We recommend Mr. Number but there are many others available.

With Mr. Number, you can automatically block spam calls or calls that do not have any Caller ID. The app also allows you to to report number you suspect may be spam and block numbers on your own.

With the way the app was built, you get better management of blocked numbers than what the iOS Settings have to offer.

Search out the app on the App Store and install. It offers features that will make blocking and unblock easy to do.