In this post, I will tell everything you need to know about XBox Enforcement reputation, how to check your xbox enforcement status and how to file appeal.

You might want to ask, what is xbox enforcement action meaning? Well, its just a regulatory system by the Xbox team to regulate players’ behavior on the game platform. Remember, Xbox is a multi-user game aimed at the preservation and promotion of a safe, secure and enjoyable experience for all Live Platform and Community members.

How Does Xbox Enforcement Work? 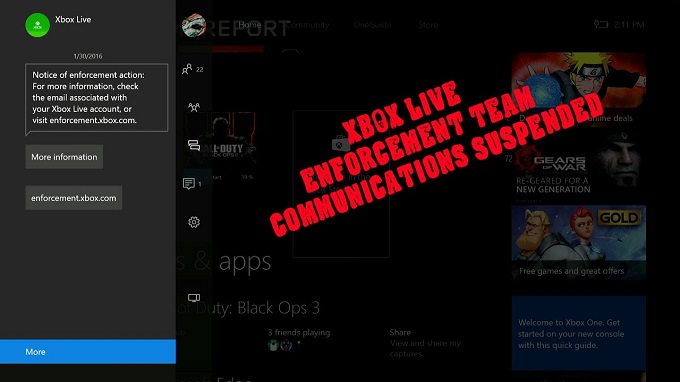 Xbox Enforcement simply creates a reputation system that rewards positive behavior (such as playing fairly and with good sportsmanship), and creates a downside (negative status) for players who exhibit bad behavior (such as cursing, being disrespectful, or cheating).

With this reputation system, all Xbox players start with a clean slate during signup and a standard reputation score of “Good Player”. As they play online and interact with other players, they’ll accumulate feedback from both your teammates and opponents, as well as from the games you play. Over time, this feedback will start to have either positive or negative impact on your Xbox Live reputation as represented by this graphic on your Player Card:

Your reputation score will have so many effects on many aspects of your gaming experience including who you are matched with, the reputation of your Xbox Live party, and your ability to communicate with others on the Xbox Live service. Sometimes, this may even lead to a ban.

Read Also: 4 Ways to connect Xbox One controller to PC

How to Avoid XBox Enforcement Ban

However, you can learn to stay save so you can avoid behavior that will result in a suspension. Many enforcements are straightforward, such as suspensions issued as a result of harassment or profane content.

1. Do not Commercialize Xbox Platform

This is called “Solicitation” on the Xbox system. You should never use Xbox for commercial purposes, including buying, selling, or trading content or services that violate the Microsoft Services Agreement and Code of Conduct. This could lead to a straight ban.

Cheating is using unauthorized hardware, software, or account modifications to gain an advantage or disrupt the competitive landscape of Xbox Live.

Account tampering refers to any attempt to manipulate an Xbox profile in a way that violates the Microsoft Services Agreement and Code of Conduct. Typically this involves the use of unauthorized software, with which players can attempt to make alterations to various parts of their Xbox profile.

Account theft is the unauthorized use of somebody else’s account. Buying, selling, sharing, borrowing, or transferring Xbox Live accounts is a violation of the Microsoft Services Agreement and Code of Conduct. The most common way account theft happens is when someone shares their Microsoft Account email and password with somebody else.

Phishing is any attempt to get information from another person (such as an email address or password) by pretending to be trustworthy. There are many techniques used, but the end goal is always the same – theft of an account or personal information.

Marketplace theft occurs when someone fraudulently acquires Xbox Live content or defrauds Microsoft through improper use of the Microsoft Store or Xbox customer support. This can include abuse of Microsoft refund policies or purchasing redemption codes, subscriptions, in-game consumables, and other content from inappropriate third-party websites.

Read Also: How to gameshare on Xbox One

A Gamerscore correction occurs on a player’s Xbox Live account when they gain achievements through the use of external tools and avoiding gameplay.

The Game DVR and Upload applications on Xbox One and Xbox on Windows allow players to record and share in-game video clips, Kinect content, and screenshots with other players. A suspension of these features can occur when a user creates or shares inappropriate content through these applications in violation of the Microsoft Services Agreement and Code of Conduct.

Your Gamertag is your identity on Xbox Live. It’s how other users see you in games, send you friend and game invites, and send messages. On Xbox One and Xbox on Windows you can also choose to share your Real Name with Friends and friends-of-friends. Your Real Name is the First Name and Last Name on the Microsoft Account linked to your Gamertag. A Gamertag or Real Name enforcement can be issued if inappropriate or offensive content is used for either of these identities.

Harassment refers to any abusive, threatening, or bullying behavior by one person towards another. Though it includes a wide-range of offensive behavior and communication, all forms of harassment have the common purpose of disrupting the gaming experience for other Xbox Live players. Harassment violates the Microsoft Services Agreement and Code of Conduct, and the Xbox Live Policy & Enforcement Team is strictly opposed to harassment in all forms.

Impersonation is any attempt by one person to imitate or act like another on the Xbox Live service, usually to give the impression of having authority or other “official” status. Users who impersonate may threaten other gamers, attempt to phish for personal information, or intimidate people through other means while pretending to be an employee of Microsoft or partner companies. Impersonation is in strict violation of the Microsoft Services Agreement and Code of Conduct.

Clubs are player-created and managed groups that help gamers meet and connect with others who have the same interests. Through Clubs, you can create a welcoming environment and bring people together. While nearly anyone can join or create a Club, in certain situations we may restrict certain Club features or even participation in Clubs when a Club is used to harass others, promote inappropriate content, or otherwise violate the Microsoft Services Agreement or Code of Conduct.

Certain Xbox Live features, such as your Gamerpic and Club background, allow you to upload custom images. This provides a great opportunity to showcase your personality and make a positive impression on the Xbox Live community. Though we encourage you to be creative, your content should respect the guidelines found in the Microsoft Services Agreement and Code of Conduct.

Your safety and wellbeing matters. When we’re made aware of an Xbox Live member who’s going through a difficult time we may send a message referring them to Crisis Text Line, a provider of free, 24/7 support for people in crisis. If you’ve received a message, we wanted to provide you with the option to talk to a trained and confidential crisis counselor. Contacting Crisis Text Line is entirely up to you, but we feel strongly in empowering every player with the tools to maintain their wellbeing.

how to improve XBox Enforcement score?

Avoid activity that other players are likely to view as unfair or unsportsmanlike.

Certain types of behavior are widely-viewed as negative, inappropriate, or disruptive by the Xbox Live community, including but not limited to:

Even if you aren’t personally troubled by such behavior, keep in mind that reputation is a reflection of how the Xbox Live community at large views an account’s activities.

Smack talk is an understandable part of competitive online gaming, but not all players react to smack talk in the same way. Routinely making snarky or condescending comments, regardless of whether you won or lost the match, will increase the likelihood of receiving negative feedback. Smack talk may be viewed as even less appropriate if the particular game or gametype that you’re playing is not intended to be competitive.

Play a wide range of games and gametypes.

If you routinely receive negative feedback due to unsportsmanlike behavior or communications in a specific game or gametype, it may become more challenging to find good matches or new players in that game title. By playing different games and interacting with other players in a positive and productive way, your reputation score can improve.